The film is just about ready to be sent for sound mixing and color correction, but before closing the door on any changes, I’ve arranged for a few groups to see the film in my home and offer me feedback. This is scary. I’m showing them my baby. What if they think my baby is ugly?
Before going to bed last night, I organized the list of who is coming on which night. It suddenly hit me: holy crap, after all this time, and all the commiserating, all the support and the tears and the laughing and time spent together, Kathy Knapp, the Pie Lady herself, has no idea how this film looks. I sat back in my chair, a bit stunned. In some ways I feel she is with me, in my head, while working on the film. Because seeing her face and hearing her voice day in and day out is such an intimate experience, surely she is privy to all the details?! No, of course she isn’t. And bless her heart, she never asked.
This morning, from her hotel room in Merida, Yucatán, a cup of coffee in one hand a box of tissue in the other, Kathy and Stanley watched the cut. During that 31 minutes and 42 seconds, I had a meeting with a client and it took everything in me to be present with her and the business at hand. Does Kathy love it? Hate it? Does she see mistakes? Does she want something changed?
The message came: “One box of tissue later….it’s amazing, Jane. Can you Skype?” Whew! She doesn’t think my baby is ugly.
We had a lovely online conversation about the film, how much it touched her, what scenes made them laugh. We talked about the journey we have been on together for over a year now, and cautiously acknowledged that 2014 will bring adventures for us that we can’t imagine. Where will the film premier? Which film festivals will it be in? What can we trim from the film in order to make it comply with PBS guidelines?
Of course I hope everyone who sees the film eventually enjoys it, but to have the Pie Lady heartily approve means the world to me. Ah, but there was one glitch. Something she had to tell me that I needed to change. My body tensed up…what did I do wrong?
Part of her story includes the fact that her ex-husband, Thomas Hripko, is partially responsible for Kathy and her mom being able to purchase the Pie-O-Neer. We have some nice images of him and Kathy as B-roll for those segments. One of the photos is black and white, she looks lovely, he looks handsome…except that “he” isn’t Thomas Rhipko.  “He” is Kenny Loggins! I doubled over in laughter. “Well” I said to her “I did note that in no other photos did he have a beard and mustache.”
Move over, Kenny Loggins, make room for another photo of Thomas Hripko. I’m sure there’s another one around here somewhere.
In the meantime, folks, here is Kathy with Kenny. 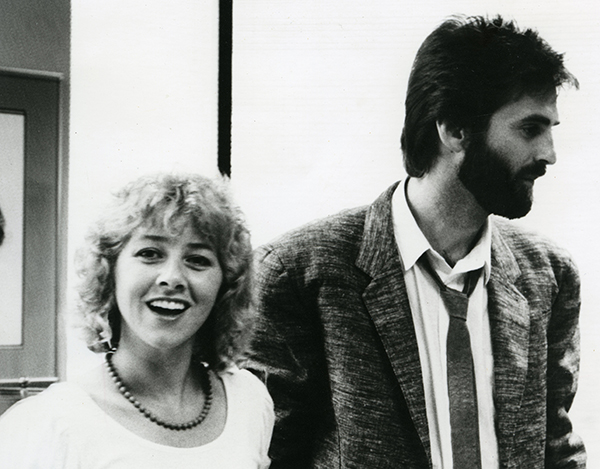